Great session recording sound with the Soundfield SPS200 ambisonics mic. This allows for a '3-D' recording of the environment, which can then be reproduced in our 5.1 Surround Sound studios with immersive results. 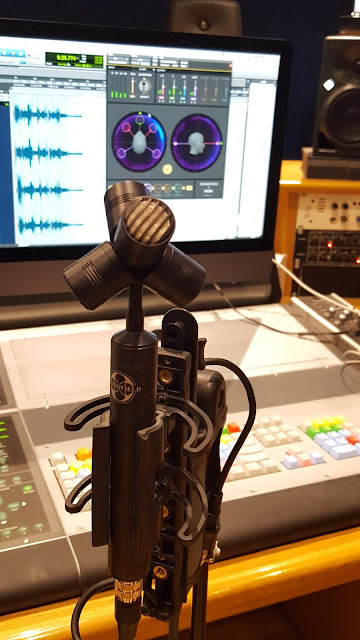 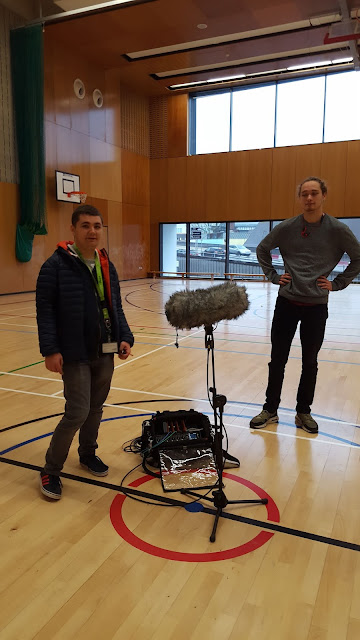 Posted by Audio Music Production @ Bucks at 13:27 No comments:

Sound Design for Games, in Studio 1 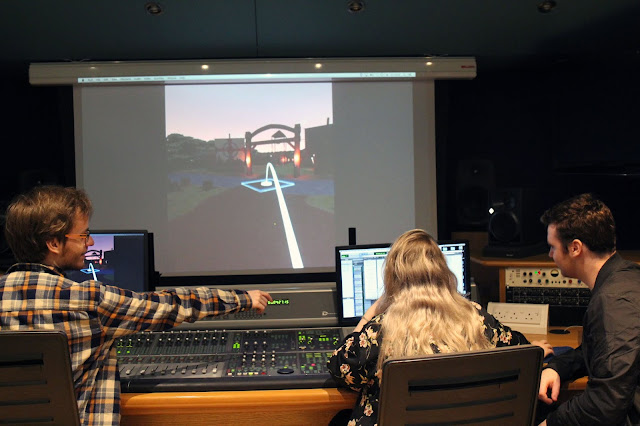 For lots more video from across the department see here...
https://www.youtube.com/channel/UC-UK1ub2QtBPMJxsqgC7hfQ/videos
Posted by Audio Music Production @ Bucks at 14:34 No comments:

Another year, another visit to the extroardinary Pinewood film studios. This included spending some time in Pinewood's vast dubbing theatres with Head of Mix Operations James Doyle who went over recent work at the studios such as the sound mix for the multi Oscar winning film Roma.
We also toured of the studio lot seeing the early stages of set building for the forthcoming Bond 25 and some of the historic settings within the studio grounds as seen in films such as Mary Poppins Returns and many others. 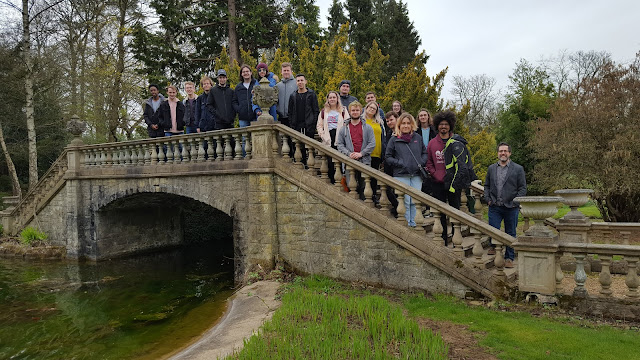 Posted by Audio Music Production @ Bucks at 14:23 No comments:

For the latest updates please see our twitter accounts... 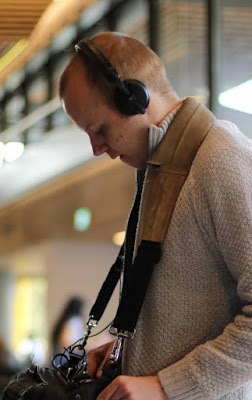 Bucks graduate George Jones has been working as a sound operator on youth magazine show Whatsup TV for Sky Television. George got the opportunity via the MamaYouth project following a year's work at a small independent music studio,
He says, "working as a trainee sound operator and runner on What’s Up TV was a great experience, intense but great. The first episode is on the 26th of Jan on Sky One and it runs for 7 episodes. It’s a magazine style show, so we did a lot of interviews on location and then had a week of filming studio links. Really excited to see the show air next weekend and get my first tv credit!"

Check out the series here WhatsupTV

UPDATE!
George is now working as a sound trainee on the popular TV drama series 'Silent Witness', and following this will be shooting a new HBO show at Leavesden Studios.
Posted by Audio Music Production @ Bucks at 16:19 1 comment: 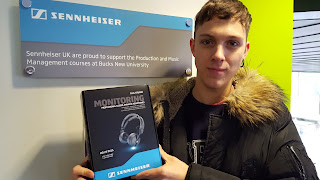 AMP student Lukas Kalvaitis has won a remix competition put on by our industry partners Sennheiser. Given a collection of loops and samples students were asked to create an original piece, with the winner picking up a pair of Sennheiser HD25 headphones.
Congratualtions to Lukas, you can check out his winning mix here
Posted by Audio Music Production @ Bucks at 11:00 No comments:

Working at the World Cup

3rd year AMP student Scott Ramsell will be part of the VAR crew for England's world cup match against Panama on Sunday.
See below from The Bucks Herald.
Best of luck Scott!! 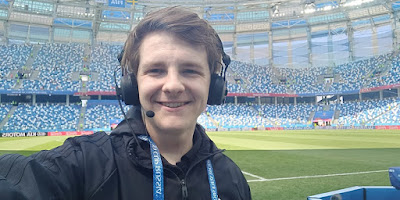 Scott Ramsell, 20, is currently working in Russia as a Referee Audio Engineer; linking up referees with video assistant referees (VARs).

Scott will be pitchside at Sunday’s England World Cup match against Panama, helping to ensure that the VAR, which reviews decisions made by the head referee with the use of video footage and a headset for communication, runs smoothly. This is the first time in a World Cup that the system is being used.
England’s match is in Nizhny Novgorod, western Russia, and Scott is responsible for ensuring that the referees on the pitch can communicate with the VARs stationed in Moscow, 260 miles away.
Scott, who is studying a degree in BA (Hons) Audio and Music production at Buckinghamshire New University said: “It’s exciting but at the same time there is a lot of pressure, with more than 500 people involved in the production of one match.
“Everyone’s job can have an impact on someone else’s so you have to be on your mettle to ensure that everything goes smoothly.
“During the matches I am right next to the fourth official and the VAR TV that the referee looks at to arrive at decisions.”
Scott has already worked on some games including Sweden vs. South Korea, and will continue to work on matches involving Argentina and Croatia, Switzerland and Costa Rica, as well as a last-16 and quarter-final match.
Posted by Audio Music Production @ Bucks at 12:05 1 comment:

Tom Waterman from Universal Audio visited recently to deliver a masterclass in mixing with their UAD plugins. Captured on video here 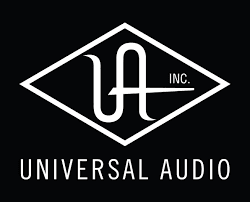 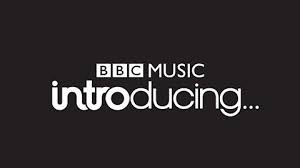 We are sooo proud of our continuing work with BBC Introducing. Have a look at some of these vids. All BBC Introducing performances are recorded and mixed by students on the courses at Bucks, both weekly on campus and at locations such as the Royal Albert Hall, as featured on BBC Three Counties radio and on BBC iPlayer

Buckinghamshire New University students have filmed an episode of magazine programme The Hornet Show with Watford Football Club live for the first time at the side’s Vicarage Road ground.
The Premier League club’s pitch was the backdrop to the hour-long episode, shown live on the club’s website and hosted by Emma Saunders and Jon Marks. It has usually been pre-recorded at the University’s campus in High Wycombe.Senior Lecturer Lorna Dean Gibbs said there was no possibility of re-takes and it was 'the first time students had been put under the pressure of providing a live show'.She added: “Despite a few other issues on the day, and the fact time was limited as the rig and rehearsals had to be done before we went live, the students worked in a professional manner to ensure we were ready for transmission. “There was a definite time pressure to the production – once we started streaming there was no way to start again - but that’s a good preparation for the live TV environment students will enter into when they graduate.”

Students studying BA (Hons) Film and Television Production; BA (Hons) Audio and Music Production; and BA (Hons) Animation and Visual Effects work each month with Watford FC on The Hornet Show, which is normally filmed on a green screen background in the University's Gateway building and also using an outside broadcasting unit belonging to the University.
The virtual set used as the backdrop for the show is designed by Animation and Visual Effects students, while Audio and Music Production students manage audio capture and sound design. The Film and Television Production students involved are studying a sports and live events production pathway in their degrees.
Student Jess Adcock said it had been a ‘fantastic experience’. She added: “It was a massive change for us from our usual set-up for The Hornet Show, with a change of studio and no green screen background. We also had the added pressure of a live shoot and knowing we couldn’t retake anything.“This made it all the more exciting and a very valuable experience for us all.”
Emma Saunders said she had been in no doubt that, having worked with the students  throughout the season, they would oversee a well-polished production shooting live.
She said: “The students then went on to exceed these high expectations and produce possibly the slickest show we've ever done.
“I was particularly impressed with their attention to detail and communication skills - both key when working with a presenters who are about to do a live show.
“As a presenter I always enjoy shooting with this team as they are consistently polite, productive and very professional. “It feels like I'm doing them a disservice when referring to any of these individuals as students as the work they carry out is of a high industry standard."
Photo credit: Sol Tomlinson. 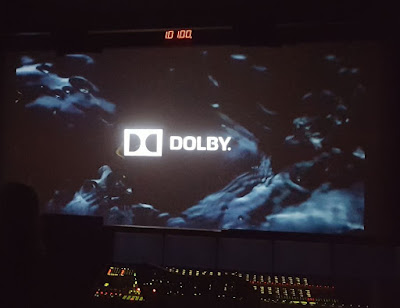 AMP students were invited to the Dolby Film School recently for a demonstration of their Dolby Atmos format, a spectacular experience of the mixing techniques used in films such as The Life of Pi and Gravity. Examples of other work was also presented, including some groundbreaking Atmos mixes of the likes of Ellie Goulding and Imagine dragons live. Further to this, students paid avisit to a leading Dolby atmos mixing facility in Soho, at Warner Bros De Lane Lea. Operations manager Mike King provided a rare glimpse inside the world famous Stage1, where soundtracks on titles such as Wonderwoman and Early Man have been mixed to completion, not to mention many of the recent Bond films such as Spectre and Quantum of Solace. 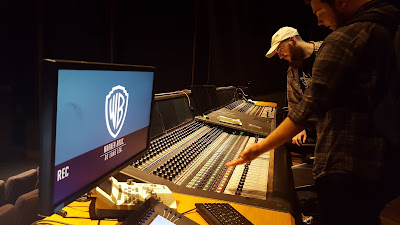 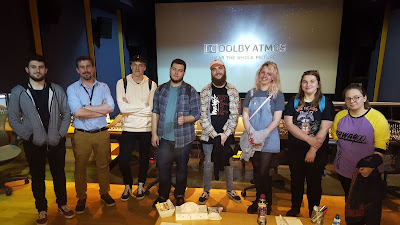